After getting a protocol from the DIY bio mailing list how to do a miniprep without EDTA* mostly using home chemicals (http://wiki.biohackers.la/Miniprep ) I try to get Diatomaceous Earth.

It would be really cool to be able to kind of ‘produce’ my own plasmid solutions. For always having some in stock. And for trying to transform bacteria other than E.Coli, without having to buy new plasmids (9$ plasmid costs + 35$ shipping from US).

*(In former times EDTA was used for developing photos from negatives (film strips).  Technically, you can order EDTA for those purposes on the web. But, like always, shipment costs are quite high compared to the value of the substances.  I still regret one day at university we did a titration with EDTA and then disposed of it. Should have taken it at home, would have been free… 50-100 mL from each group (7 groups) would have been a lot of stuff to me)

So, here new pictures of the plants.

The difference between the groups have become far smaller.

But, let’s wait if the phenotype will be subject to changes.

Glowing mushrooms are not as cool as glowing plants.

But mother nature has provided us with them. I bought a set of mycelium from a webshop called “Waldviertler Pilzgarten” (German for ~ Mushroom garden of the Waldviertel).This species also grows in Europe, but just the American strains glow.

You get a kind of marmelade glass jar (with an air filther to make them get fresh air)  and inside this there are wood dowels that are overgrown with P.stipticus mycelium.

You take cutten pieces of wood trunk (20cm in diameter, 0.25m long) and drill holes into it. Then you put the dowels into it and seal it with wax. After some time (it is said several month to one year) the mycelium will have occupied the whole trunk and then the mushrooms will grow. The mushrooms are said to be so bright that you could read a newspaper sitting next to it.

I also filled one marmelade jar (with some cotton fibre in a hole in the cap for fresh air) with wood powder, added some water and put it into the pressure cooker for 20 Minutes. So it should be sterile. And then threw in one dowel to get a kind of control culture. Another dowel was put on agar in a jar, but after some time it was to see that it got contaminated anyhow.

When you google the term “Urzeitcode”, which is German for ~ ancient time’s code, you will find a book about someone who found out that organisms that grow in an electrostatical field sometimes grow faster, change their phenotypes and go back in evolution. (Ancient, turned-off genes are said to be revived)

Or check out this video ( http://www.youtube.com/watch?v=cmH5eyo3GiI , although in German).

I was not sure, what I should think about it.

So I simply tried it out. A friend of mine gave me a transformator (from a device for shocking people when touching their hand) and told me to build a cascade and atach it to it. The transformator makes some 1000volts (probably a bit more) out of 9V source, and the cascade makes 4000Volts DC out of that. Between the electrodes, some 4-5 cm are left space. That’s where the seemen come’s into.

Firstly, I attached it to a battery without seemen to test it, but the battery was empty after two days. Then I took a net-voltage transformator with 9V and soldered it to the device.

So i put seeds of grapes into the device, put some water on it. I also made a control culture which i threated the same way, but without the field.

After 8 days I took them out, and there was mould on the e-field seemen. Didn’t care too much and put both of them into soil.

It didn’t grow for weeks and finally I forgot them on the balcony. Some days ago, I noticed there had been some growth.

And guess, what culture had grown faster!

Alright, it was the E-field ones.

In total, out of 7 seemen, 4 have grown in the e-field and 3 in the control culture.

They are still on my balcony, and now I wait and see if they develop phenotypic changes.  E.g. such as thorns, spines, or prickles. Or something similar or different. 😉

So, my first transformation is done, after all.

In short, I inserted the genes for bioluminescence (of a marine bacterium) into E. Coli @university.

If you want to learn more about transformation, google “heat shock transformation”. There is plenty to find on google. And make sure to check out “How to do a pGLO Transformation”  (by biscuitpiggy2) on youtube. It clearly shows the mechanism of DNA uptake using plasmids. 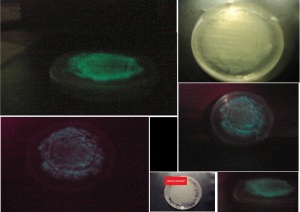 I once re-streaked a frozen culture on very fresh LB-amp plates. It was amazing! One could see the glowing in a not-very-dark room, even though the streetlights was shining in. Probably because the ampicillin worked better, and because the inoculated bacteria were from a luminescent colony, there were much more bacteria carrying the plasmids than from the first “generation”  –  thus glowing way brighter.

I’m a hobby biologist from Austria.

As its name says, DIY-Spartan-Biotech is  about doing biology with very little. For english speakers it may not be totally clear… Mr Makeshift may sound better for natives. In German a “spartan chandelier” is just a lightbulb hanging from the ceiling. ~Do as much as you can with the little resources you have.

I was born a biologist, later I recognized also Chemistry and Physics are very interesting.  Until recently, say around 2011, biology ment for me to classify animal and plants and discover new stuff. And how to make e.g. food production more efficient. My former biology teacher told us, the 19th century was the century of physics, the 20th century that of chemistry, and this one is about biology. I thought he exaggerated a bit.

But I came across DIY Bio and I was very impressed what you can do with very little: You can even engineer the genes of bacteria (and plants and mammals, of course, too) in your kitchen (if this is legal in your contry).  For that purpose, I asked a professor of mine whether I could use  our universitie’s biology lab for some amazing stuff. He agreed, and thus, so far I’ve done a sucessful transformation of E.Coli.

Some of my goals include:

Making a plant that glows in the dark, produce biodiesel with bacteria (as seen on the web with “pMicrodiesel”), …. And most important of all: learn new stuff and have fun!!