Was thinking if it would sense to make a picture-based instruction on how to genetically engineer plants in a diy setting. The pictures are from the experiments I did in the Ars Electronica Lab.
To show people this is not black magic at all, and everyone can do it. Also read in the “synbio for beginners pdf” I wrote to learn how the DNA desgin is done.

In this experiment, we first transformed tobacco with a pGreen-derived GFP vector. Thus a gene envcoding GFP is inserted into the genetic material (chromosome) of a plant.
The plant cells then produce the green fluorescent protein. That means, if you put the plants under UV-light, the protein absorbs the UV light and emits green light.
GFP is often used as a proof-of-concept to show your transformation method worked.

http://www.pgreen.ac.uk/JIT/pGreen0000_fr.htm pGreen is a Ti-plasmid. It encodes a gene (ori) that make it replicate in bacteria (else the bacterial cell divides into two cells, and just one carries the plasmid), a resistance against the antibiotic kanamycin (so you kan kill all bacteria that haven’t taken up the plasmid by putting them into kanamycin). Then there is left border and right border (25 letters long) which are recognized by the bacterium. It ~”cuts out” the DNA between the borders and shoots it into plant cells (in our case there’s just a “always on” promoter, GFP and terminator inbetween). No other DNA is transferred, so you get a well defined outcome.

The plasmid DNA was inserted into agrobacterium with CaCl2-heat shock and then added some sterile LB. After one hour (time for the agrobacterium to express kanamycin resistance proteins) the bacteria were then plated out on LB-Kanamycin agar in a petri dish.

A colony was picked and transferred into LB+Kanamycin liquid medium.  The medium was then placed horizontally for 2 days to allow the bacteria to grow. The horizontal position increased the surface, so that the bacteria got more oxygen.

After two days (the bacteria multiplied in the medium), a plant was infiltrated with drops of the agrobacterium. Therefore, the tubes were centrifuged (6000 RPM, 5 minutes). The supernatant was discarded. Fresh LB was added, and some acetosyringone, and vanillin sugar, respectively. AS and vanillin are phenolic compounds, which are a wound signal of plants. Agrobacterium “smells” these compounds and the virulence genes are upregulated.

After 5 days, we had a look at the plant (in the box) under UV light, but saw no glowing. After 7 days we opened the box, and it was fluorescent. The magenta box seemed to have filtered out the UV light.

The leaves seem a bit reddish due to weak chlorophyll autofluorescence. The green spots are the places where agrobacterium touched the plants, there it inserted the gene for the fluorescence protein.

Shown is also a native, wild-type (untransformed) leaf, which is just red.

I was later told that usually you infiltrate the bottom of the leaves, where it has holes for breathing (stoma), while on the top it has fibers to protect it from pests (such as agrobacterium 😛  ). So, my friend told me it was a miracle I got some glow anyway. Could have been a lot brighter if we had applied the bacteria solution onto the leaves’ downsides. 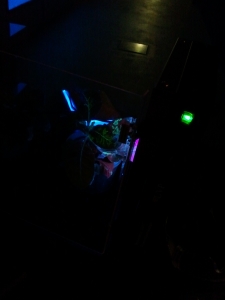 We infiltrated bigger plants that way, and it just worked again.

(Thanks to T. Moravec, IEB, Prague for providing the DNA).

Hope you enjoyed it. Try it at home, kids (unless your government doesn’t allow it).  Then try it in a lab.
Add insuline gene or whatever protein you want the plant to produce. Epo?